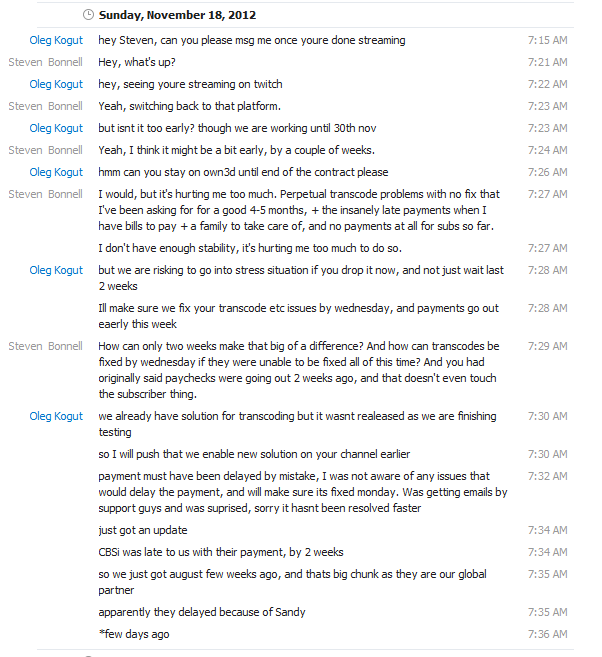 Of course as I’ve already left, now all of the promises are being made in regards to fixing the transcodes and what not. And of course my payments were late due to both hurricane Sandy and CBS not paying own3d.tv on time. I’m not sure how that affects all of the previous months of being paid so horrendously late, but whatever.

Penalty for leaving the contract early

The reason I left my contract early was because I was well aware of the penalties for leaving. They were expressly written in the contract I signed and agreed to, and a simple cost-benefit analysis would show that it was worth it for me to bail on the contract 2 weeks early.

My penalty for leaving the contract early is as outlined, quoted from my contract –

That means that I should have owed own3d.tv half of ~60% of my average revenue for a month. This penalty was nothing considering my last paycheck from them was marked for July.

Here is my final conversation with Oleg, where he threatens that his lawyers had frozen paychecks to me (because I’m sure he was just -just- about to send them out) due to me leaving the contract early – 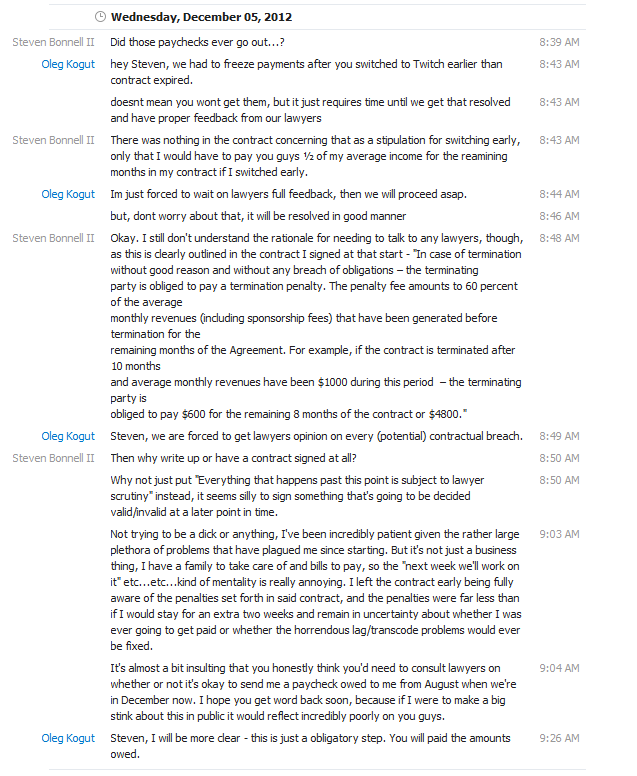 Of course at the end he assures me that I will be paid eventually, but that was early December, and he has since stopped responding to my inquiries.

My motivation for writing this is that I hope to dissuade others from signing up with own3d or making any kind of agreements with them in the future. I am in an incredibly tight bind, financially, as I’m finally coming to accept that I worked entirely for free for half of 2012. If you subscribe to streamers on own3d, I would hope that you check with the streamer to make sure they’re actually being paid, otherwise you’re essentially shipping off $5/month to own3d with no benefit (actually, a detriment since you see no ads) whatsoever to the streamer. If you’re an aspiring streamer or a member of a pro team and you’re looking to set up a stream for yourself or your team, I would highly encourage you to stay away from own3d.